Discover the Unique Charm of the Moustache Parakeet

Meet the Moustache Parakeet, a unique and beautiful bird that will steal your heart.

With their distinct “mustache” feathers above their beaks, they are truly one-of-a-kind. Native to China and the islands of Indonesia, the Moustache Parakeet can now be found all over the world.

In the wild, these birds thrive in hills, woodlands, and mountains, gathering in flocks of up to 60 birds or more. Their melodic calls and unique personalities make them a favorite among bird enthusiasts.

Imagine the joy of having your own little flock at home, with their charming personalities and distinctive mustaches. The Moustache Parakeet is the perfect pet for any bird lover.

If you have been asking such questions as, “Are the Moustache Parakeets good as pets?” or “What does it take to care for the Moustache Parrots?” then, this post is just for you. We have highlighted everything you need to know about this small parrot in this piece.

Quick Information about the Moustache Parakeet

Species varieties of the Moustache Parakeet

The Moustache parakeet has 8 recognized sub-species which are broadly divided into two main groups.

In Group 1 of the Moustache parakeet subspecies, the males and females both have red beaks, however, the males’ beaks are not as brightly colored as the females’. This is a subtle distinction that can be used to identify the sex of the bird.

Additionally, the shape and size of the beak can also vary slightly between subspecies within Group 1. For example, the Psittacula alexandri may have a slightly longer and more curved beak compared to the Psittacula dammermani which may have a shorter and straighter beak.

These variations in beak shape and size are also used to distinguish between subspecies within Group 1.

Additionally, the females in Group 2 also have a distinct pink stripe running from their chest to under their ear.

This group of Moustache parakeets is known for their unique and striking appearance, making them a popular choice among bird enthusiasts and pet owners.

It is important to note that proper care and attention should be given to these birds, as with any pet, to ensure their health and well-being.

You can read more about different types of parakeets here or color diversity in the budgie colors.

Diet – What Does The Mustache Parrot Love To Eat?

These tiny beautiful birds do well on a mixture of the following foods:

However, don’t forget to keep foods like avocado away from your mustache parrots because it can be very poisonous to him/her. 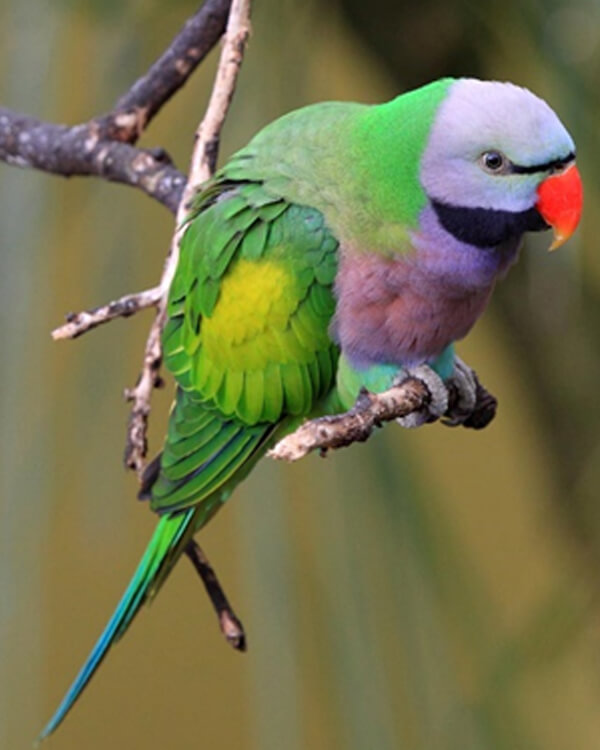 The moustache parrots require lots of care to make sure they stay healthy to provide good companionship. On a daily basis, ensure you replace the dirty food bowls and water dishes with clean ones. A moustached parakeet should be provided with a large cage with plenty of room for climbing.

Remember that this species of parrot are intelligent birds, so you need to keep lots of interesting toys in their cage to keep their mind occupied. Don’t let your bird go bored, because it can make the parrot miserable and could result in different behavioral problems. Read more about how to take care of your budgie.

So, provide enough chewable toys and equipment for the bird to chew on. You can also put other wooden items that are safe for birds in the cage for them to chew.

To keep the birds healthy, moustache parakeet’s cages and other objects they come in contact with need to be kept clean. Clean the cage at least once a week. Clean the floor of the enclosure once in two weeks and also clean the toys every week.

You also need to exercise your birds regularly. Moustache parakeets should receive a minimum of 4 hours of supervised playtime outside their cages every day.

What Are The Common Health Conditions Of Moustache Parakeet?

Popular among the health conditions of moustache parakeets are:

Moustache Parakeet as a Pet

The moustached parrots are often referred to as the best-kept secrets of the parrot world. Their gentle disposition, talking ability, and overall sweet personalities make them wonderful pets every bird lovers will like. However, it is best to buy your moustache parakeet when it is still young and it should be weaned before you bring it into your home.

Moustache parakeets are usually seen in the wild in large flocks of about 20 to 60 birds. They usually don’t mingle with other parrot species except on some occasions. When together in the wild as flocks, they often make a loud noise that oftentimes announces their arrival and serve as cold call when danger is near.

They live mostly in hilly areas, woodlands, and mountains. In the wild, they can be seen feeding on fruits, seeds, and blossoms.

When the breeding season comes – usually around April, these parrots pair up and go nest in hollow cavities to raise their young. The female lays their eggs inside a tree hole and the male stands guard and feeds the female while incubates. When the babies are successfully raised, they vacate the nest around 7 to 8 weeks.

Compared to other parrot species, the moustache parrots seem to be a bit more difficult to breed. Breeding usually starts just before the hotter months, though this could vary based on location. It is also easy to tell this time because the females are usually seen singing before they lay their eggs.

The female usually spend lots of time inside her nesting box before she is ready to breed. During this time, it is normal to be hearing chewing or scratching inside the box. The nesting materials inside the box can also sometimes be removed by the bird. So it is your duty to regularly replace the wood shavings back into the box to protect the eggs. Read more about breeding budgies.

The mother usually lays two to four eggs and incubates them for about 22 days. When the eggs are ready to hatch, the babies make small holes from inside the egg to allow them breathe. The eggs then hatch within 24 hours. Once the babies are hatched, you may require to hand feed them hourly.

When the babies start refusing feedings, then it is an indication that they are ready for weaning. During this time, start feeding them small portions many times throughout the day instead of 2-3 large feedings. Most moustache parakeet babies will wean around 10-13 weeks.

How to identify the gender of a Moustache Parakeet?

A method to quickly identify the gender of a Moustached parakeet is by it’s beak. While the males have a orange beak tipped in yellow, the females are identified by their black colored beak.

Because of the somewhat elongated tail of moustache parakeets, the best housing you can provide for them is usually a small macaw cage. The minimum size of such a cage should be about 3’x2’x3’.

Don’t be tempted to put two individual birds inside one single cage. Sometimes, even keeping different genders can result in problems because the females always love to dominate the males. Like we earlier said, ensure you provide enough toys in the cage for your bird to play

Moustache parrots often prefer a temperature of around 70°F (21°C).

Are you considering adding a Moustache Parakeet to your family, but unsure of the cost? The price of a moustache parakeet can vary based on a few factors such as the breeder, the time of year, and the age of the bird.

On average, you can expect to pay anywhere between $500 and $700 for a healthy, well-bred moustache parakeet. However, it’s important to note that investing in a quality breeder and a young bird will ensure a healthy and happy companion for many years to come.

Are you ready to adopt a mustache parakeet? Check out Search & Adopt pets, it’s a nice tool to find a parakeet (or parakeets?) nearby ready to be adopted & loved.

Final thought about the Moustache Parakeets

Moustache parrots have some unique and sweet personalities that make then a perfect pet for both new and experienced breeders. They are intelligent and are good talkers. But taking care of them might not be as easy as some of its cousins like the Monk parakeets and the Alexandrine parrots.

If you have been looking everywhere for a small parrot that enjoys talking and perching on your shoulder, you will definitely love the moustache parrots.